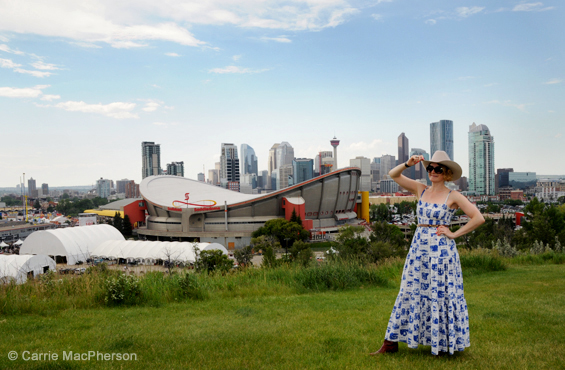 I love an occasion where I can dress up and play the part – whether it’s for a theme party or a festival like Venice’s carnival, I always put some thought into what I’ll wear to make my experience an even more authentic one. So, when I was invited by GMC Canada (one of the major sponsors) to attend the centennial Calgary Stampede (July 5–15, 2012), I readily accepted since I’d never been and I had heard that for 10 days, everyone gets into the spirit, donning cowboy boots, hats and other Western wear. After spending two days at the Stampede, I felt like a genuine cowgirl and even have the boot blisters to prove it! 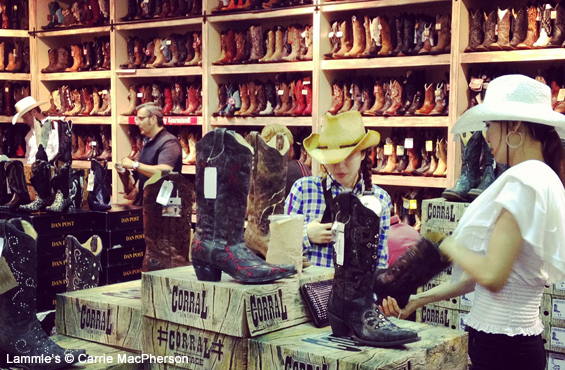 As far as festivals go, the Stampede is pretty spectacular because literally everyone is wearing cowboy hats. If you don’t own one, there are plenty of spots to pick one up at the Stampede. Lammle’s is the most popular company to get your hats from as they have eight different locations in Calgary as well as many vendors on the Stampede grounds. You can get a genuine cowboy hat for about $100, whether you choose straw or felt. If it’s a pair of boots yer after, then you’re best to head to one of their stores in the city, as they don’t sell boots at the stampede. GMC took us to Lammle’s on Stephen Avenue Mall where I found a pair of stylish red leather boots for $300, but you can find traditional leather cowboy boots there for as low as $150. Be sure to pack some band-aids in your purse because those new boots are guaranteed to give you blisters (but everyone knows you need to suffer to be stylish!) 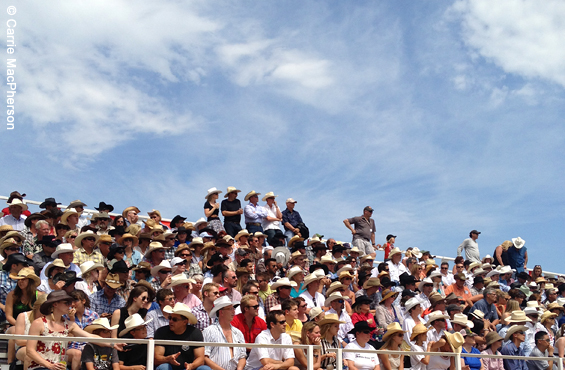 Once you’ve got your cowgirl outfit, head to the Stampede where you can take in the daily RCMP musical ride that opens the Stampede rodeo. Spend the afternoon in the grandstands watching the terribly thrilling feats of cowboys and girls as they ride bucking broncos and bulls, wrestle calves to the ground, or race around barrels on their horses. Once the rodeo wraps up around 4 p.m., everyone tends to head to one of the many watering holes. The main beer tents and concert venues are great places to wet your whistle. After happy hour, explore the fairgrounds and the hundreds of food vendors where you can sample unique Western fare such as Alberta beef-on-a-bun, pulled pork, bbq turkey drumsticks, corn on the cob and much, much more. My weakness remains with the classic amusement park mini-donuts. 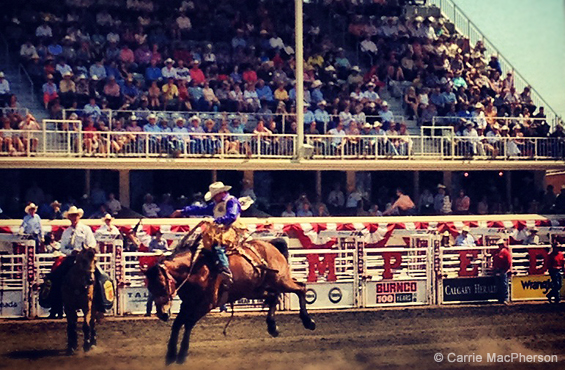 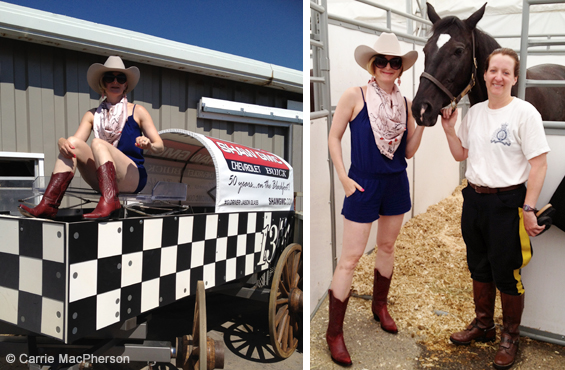 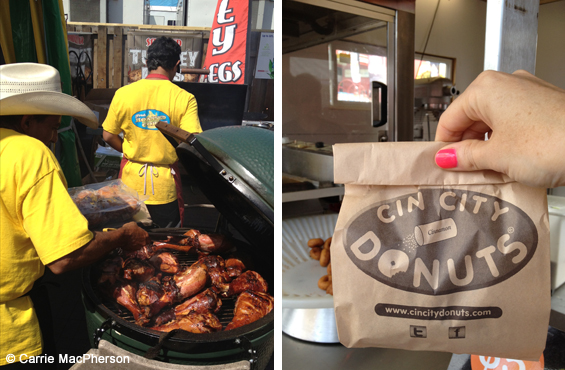 Head back to the grandstand to see the exciting chuckwagon races. These four horse-powered wagons make it kind of like watching Montreal’s Grand Prix without the noisy engines! I had the chance to chat with chuckwagon driver Chad Harden, who was staying on site with his family and 19 horses. Talking to Chad was an interesting insight into the life of a chuckwagon racer – his entire family is involved with the stampede and the care of the horses. I wished Chad luck before leaving, but unfortunately read a few days later that he lost three of his horses in an unfortunate accident. Chuckwagon racing is still a highly controversial sport, but my heart goes out to Chad and his family all the same. 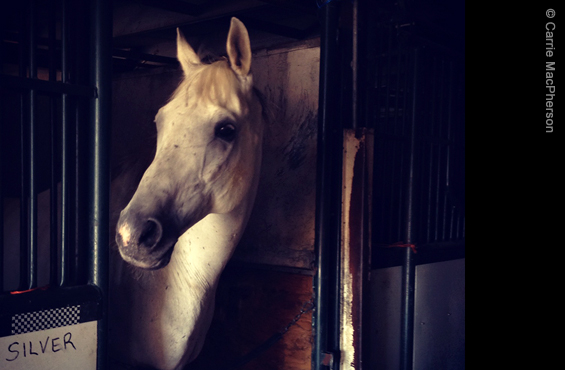 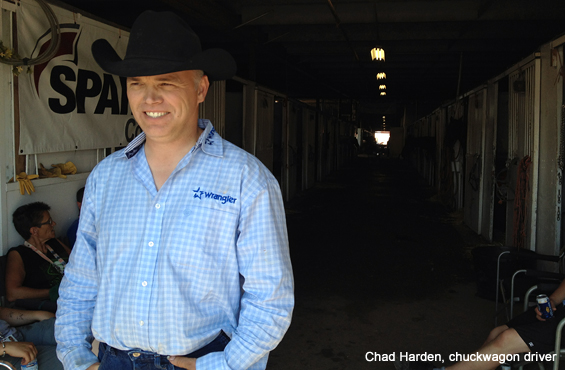 Following the chuckwagon races, guests can either stay at the grandstand for the evening’s entertainment or head to one of the beer tents and live music venues. For the centennial, they pulled out the big stops on the grandstand, with dirt bikes performing jumps over the stage and its entertainers, and a concert including local talent and country star Paul Brandt. If you’re still up for more adventure after the fireworks wrap up the grandstand show, head to the fairgrounds and hit some of the many rides. The one I didn’t try, but that looked like extreme fun, was the 850-foot-long zip line across the fairgrounds ($40). 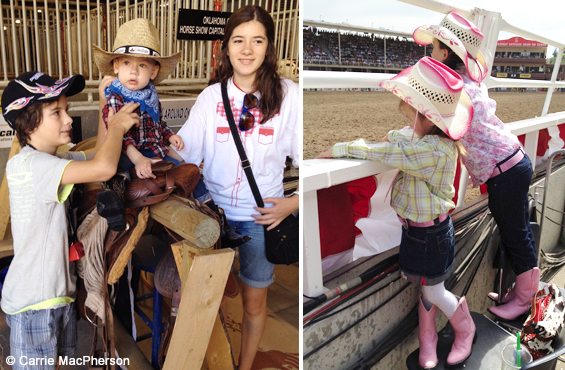 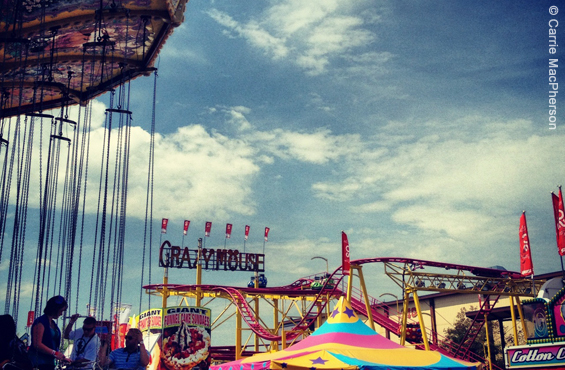 With more and more people attending the Stampede each year (1,409,371 this year!), this obviously is a wild wild west trip you won’t want to miss! Even if you only go for the dressing-up part, which a friend of mine dubbed “Glampeding.” And, if you happen to make it to next year’s Stampede, you’ll be attending the 101st edition, which would be the perfect introduction – Stampede 101! Yee haw! 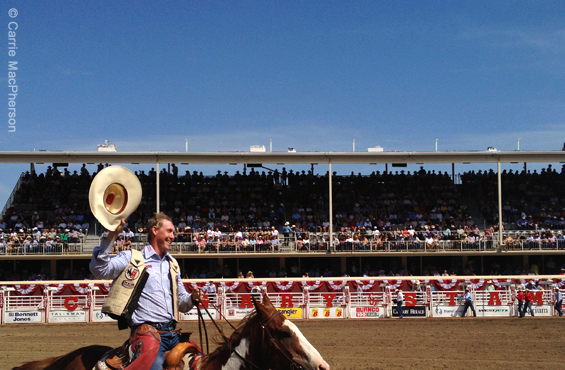 I’d like to thank GMC Canada for taking me along on their Road Less Traveled Stampede Experience! Extra thanks for the cowboy hat and boots! 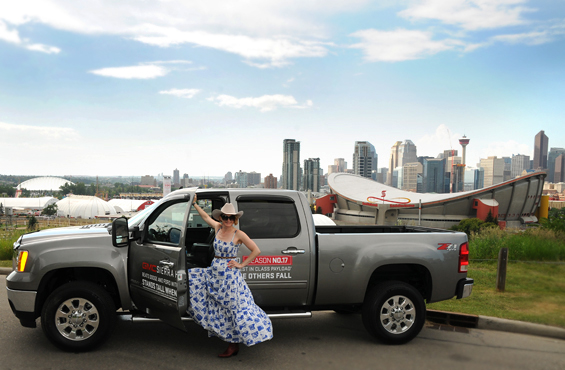