It has only been a few days since I got back from France for the France Nature bloggers challenge, but I am still getting over what I call “post-press-trip-partum” – that depressing period following an amazing press trip when I return to reality and have to come down from a very VIP high. To help you understand why I feel this way after my trip (you may already have an idea if you followed my adventure on social media), I will give you a recap with all the highlights. Starting with the first two days of the trip. 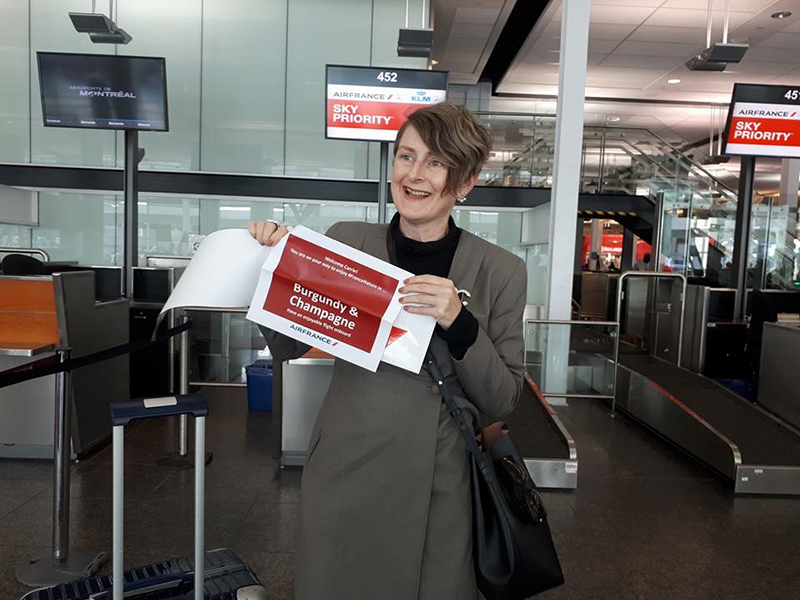 The first exciting detail of the trip was when I arrived at the Montreal airport and was greeted by the Air France and Atout France team. They handed me a large envelope which included my surprise destination and trip itinerary. I was thrilled to find out they were sending me to the destination I had hoped for as my first choice: Burgundy & Champagne! I did a little happy dance and celebrated with a glass of champagne in the Air France lounge before boarding our flight to Paris on the new Dreamliner plane. 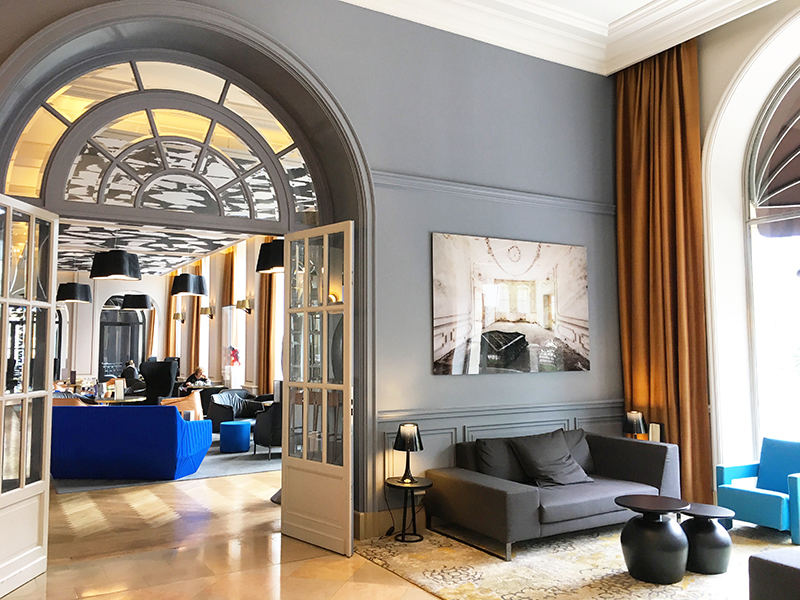 We arrived early Monday morning in Paris and were greeted by Air France reps that made sure we made our connections. Mine was easy, I hopped on a bus to the Gare de Lyon to catch the TGV to Dijon, thanks to Rail Europe. I’ve always been a fan of train travel and the nearly 2-hour trip went by quickly and smoothly. Once in Dijon, I met with Mylène from the Burgundy-Franche-Comté tourism board and she took me to lunch at Les Jardins by La Cloche at the Grand Hotel La Cloche. Recently renovated in the trendiest designer decor, it was a real treat to dine there. 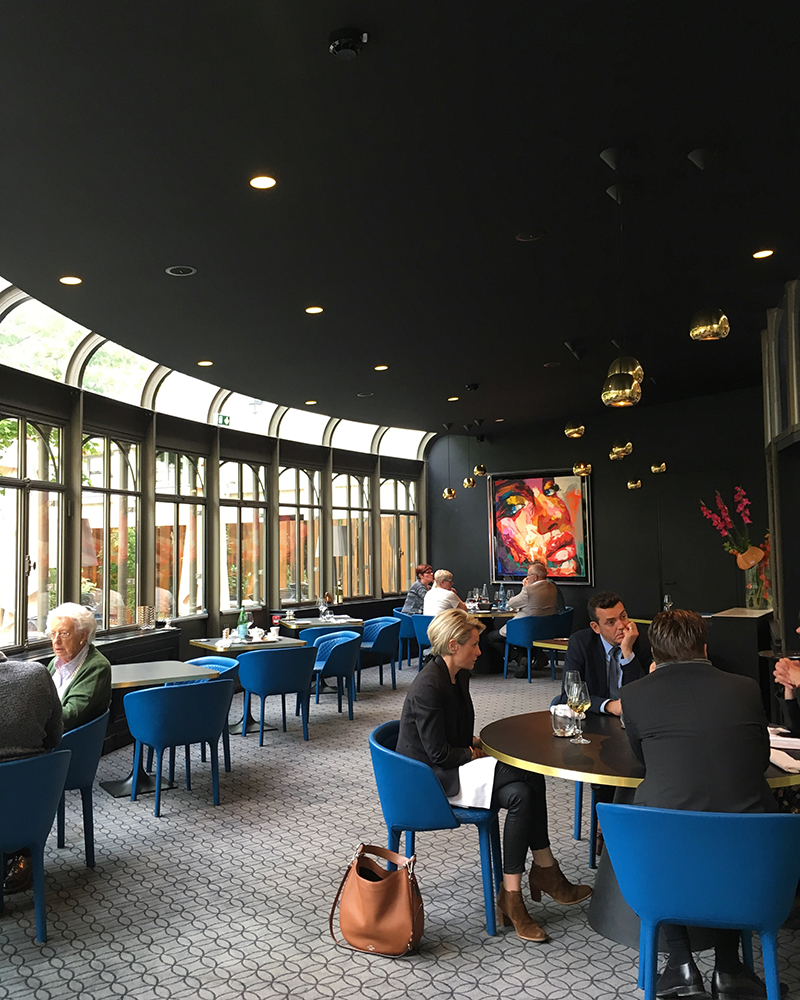 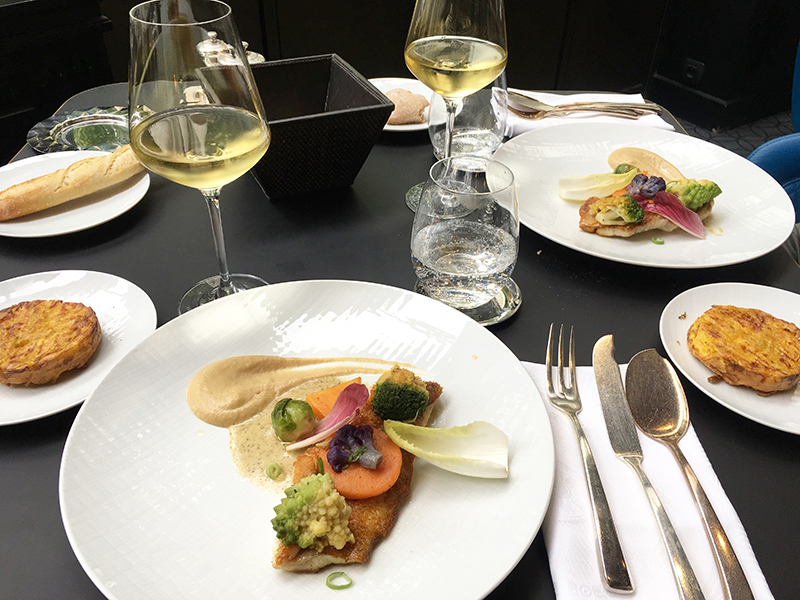 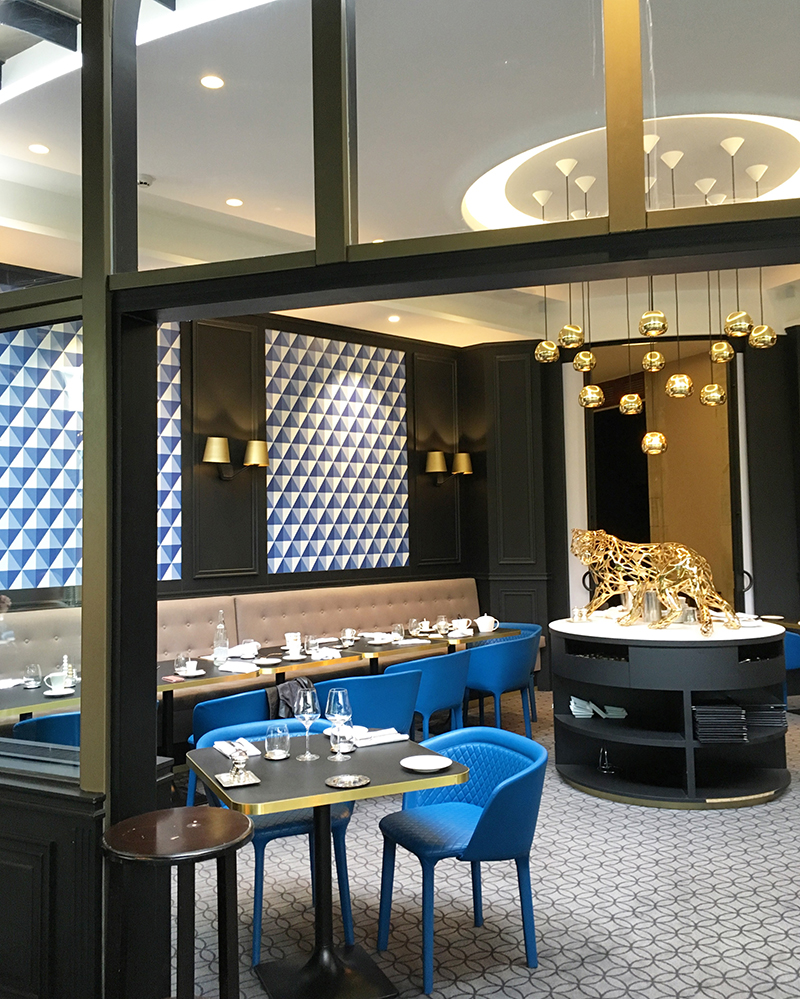 Afterwards, I was able to discover the city of Dijon thanks to the little brass arrows dotting the pavement throughout the city along the Owl’s Trail (there’s even an app). The arrows are engraved with a jaunty owl, also known as “La chouette” – one of the iconic symbols of Dijon as there is one carved into the church of Notre Dame (the oldest church in Dijon) and if you rub it the right way while making a wish – your wish may come true. Read more about the lucky owl here. 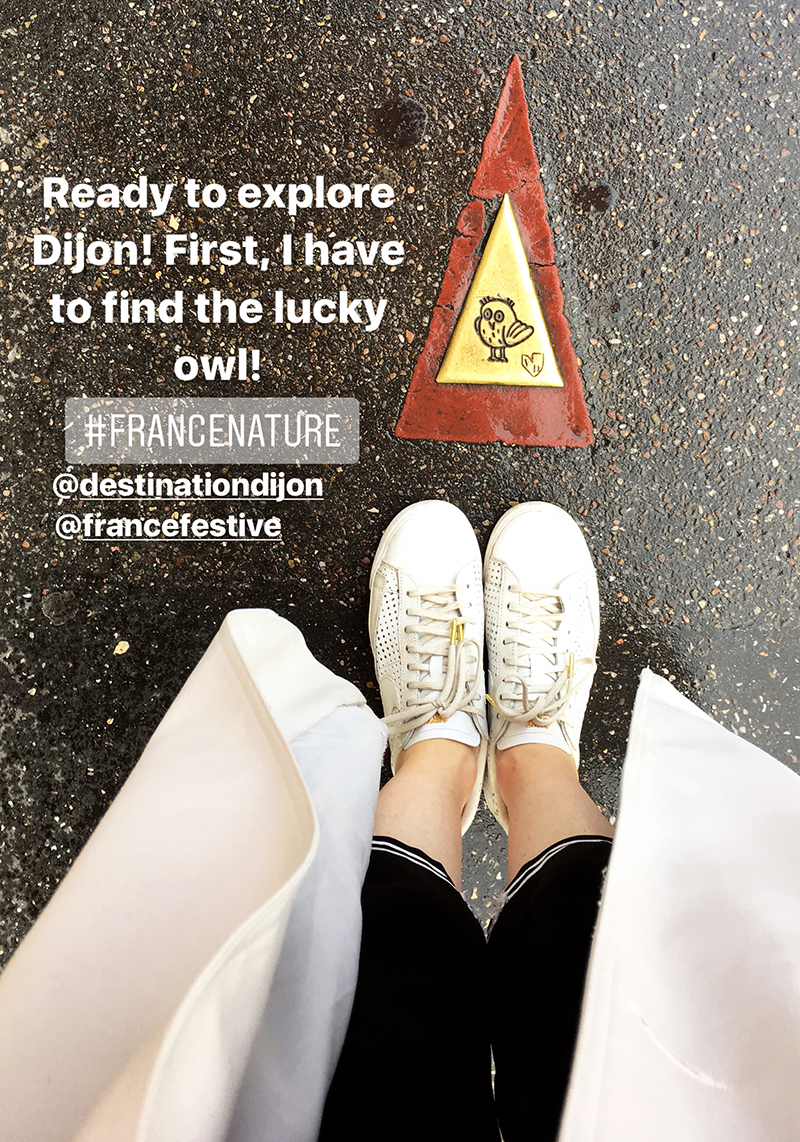 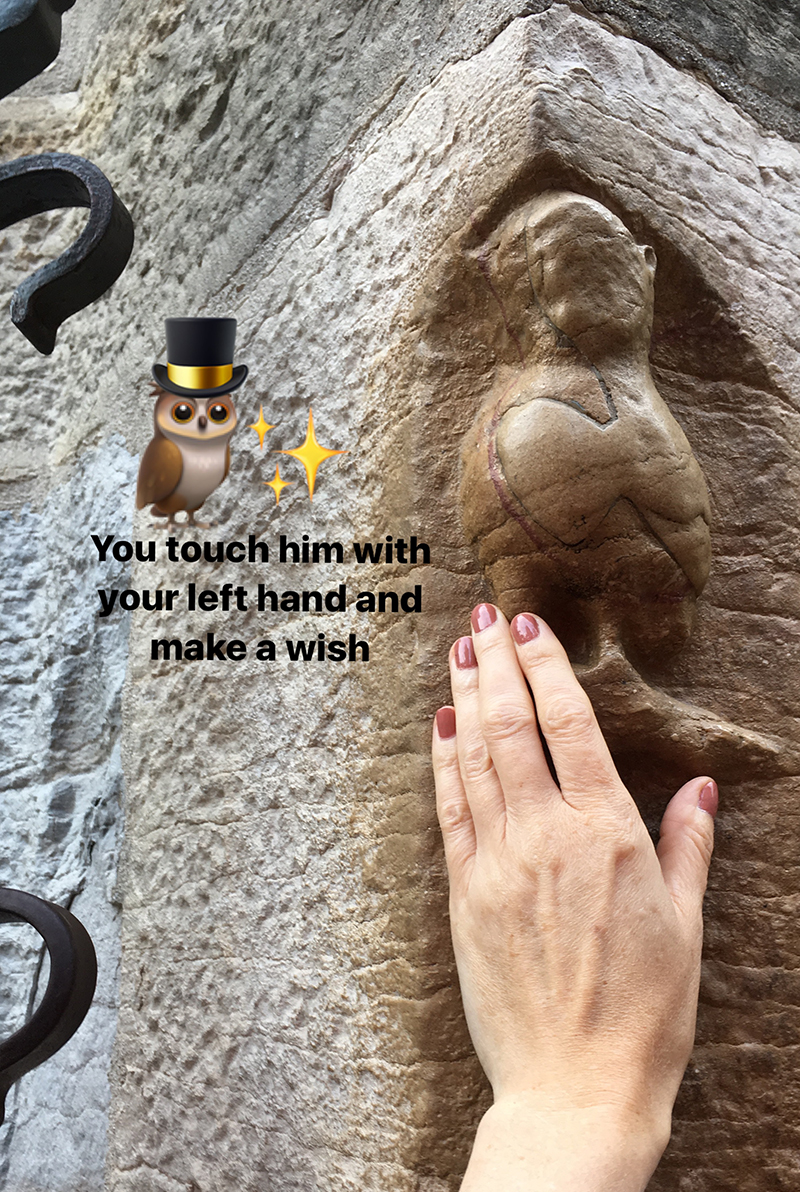 After discovering the lucky owl, I was invited to climb to the top of the Philippe le Bon Tower. The 316 steps weren’t too tricky even though I hadn’t slept in over 24 hours. Afterwards, I stopped into La Maison Maille mustard boutique for a quick tasting and purchased my first souvenir from this part of my trip – a pot of  Chablis-flavoured Dijon mustard. Divine! That evening, I strolled toward the Palais des ducs where I had dinner with Geneviève from Tourism Dijon at the new brasserie, Pré Aux Clercs by renowned chef Georges Blanc. I really enjoyed my entrée, eggs en Meurette (poached eggs in red wine sauce and escargots) and the veal chop in Dijon mustard sauce was my classic main dish. 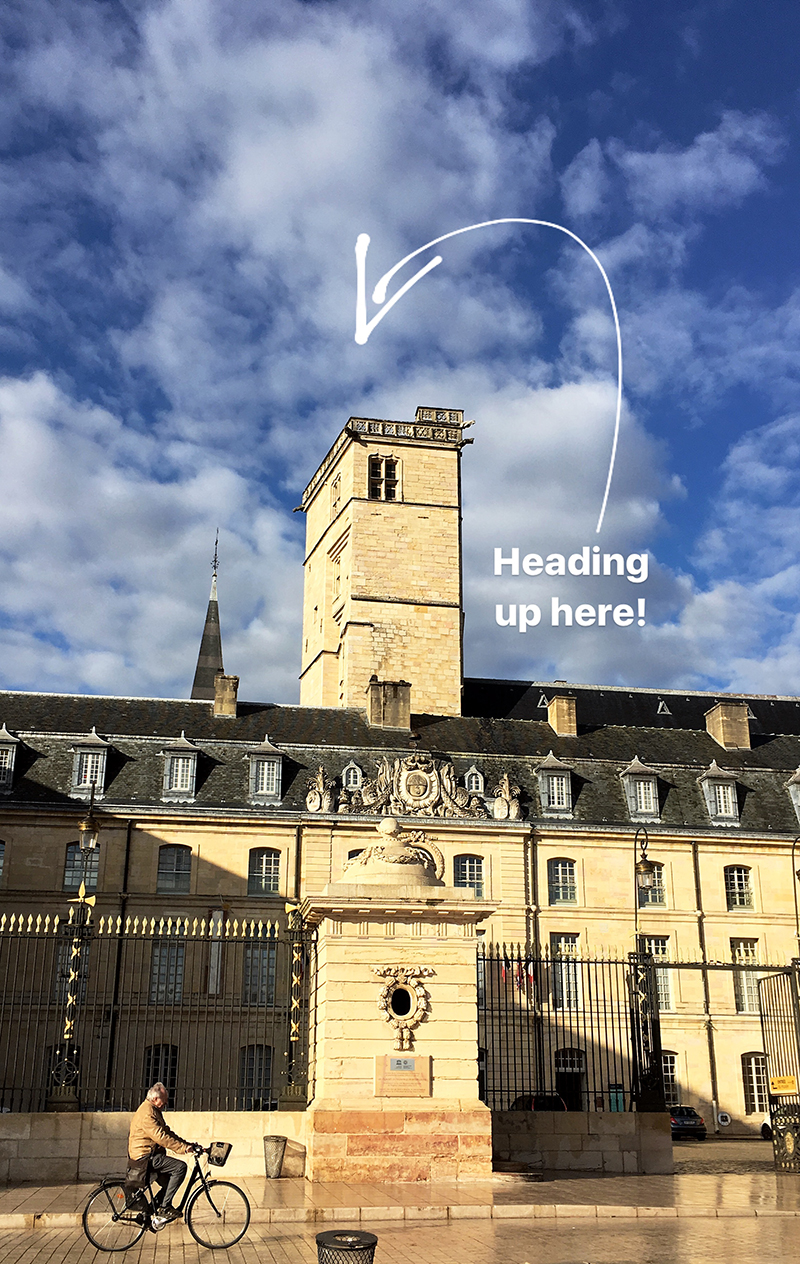 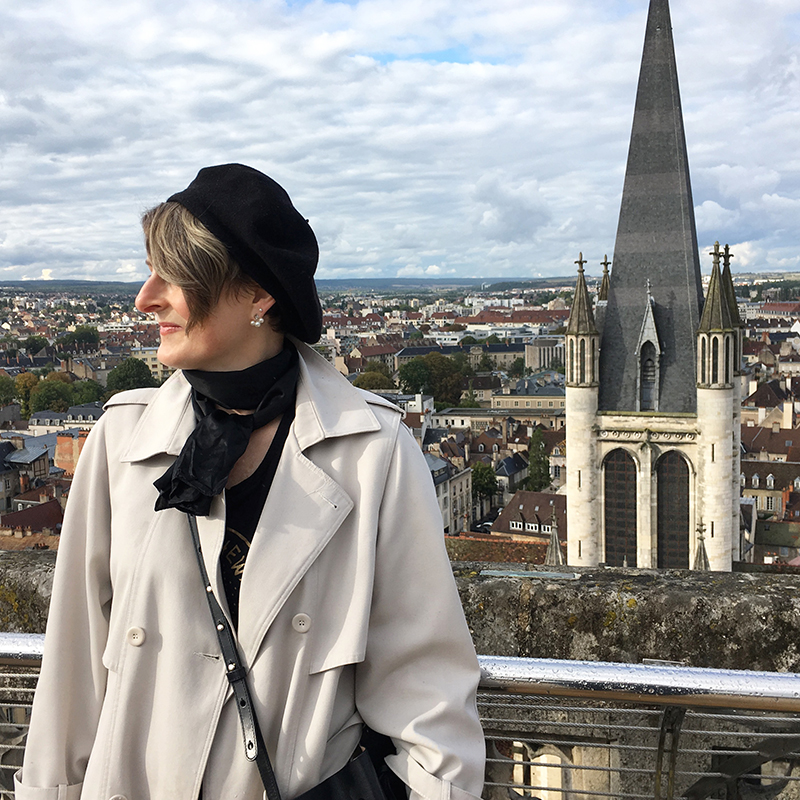 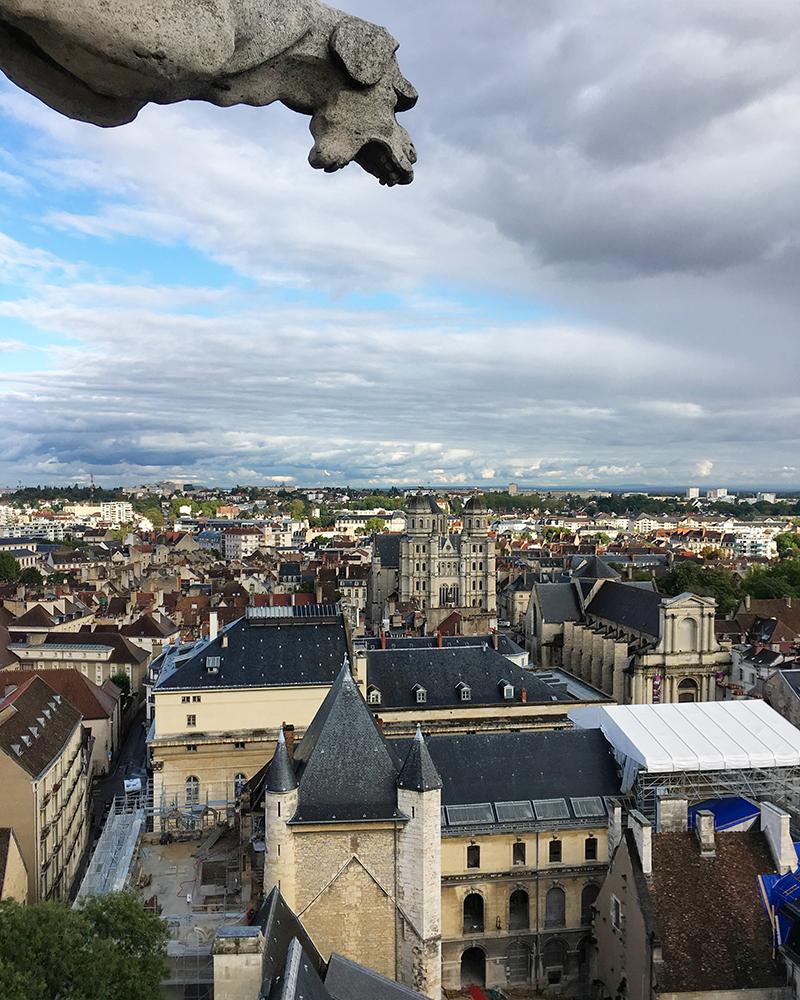 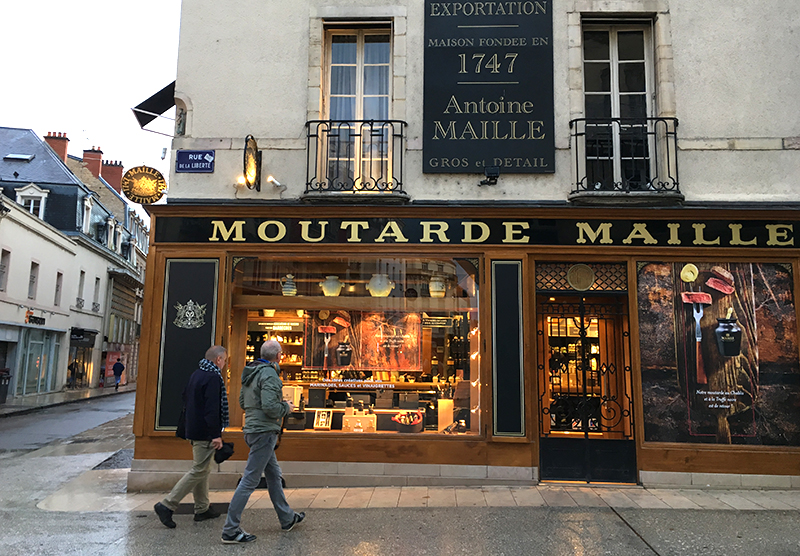 The next morning, I set my alarm for 6am so that I would have time for a quick dip in the pool at my hotel. Feeling refreshed, I was ready to embark on my first real day of outdoor adventure. I met with Penny from the tourism board who drove us to the town of Charquemont near the Franco-Swiss border. There our hiking guide, Patrick Bruot took us on a 6km-hike through “Death Valley” employing ancient smuggling trails along the river Doubs (the natural border between France and Switzerland). The French would smuggle all kinds of things from Switzerland, from matches and sugar, to even playing cards (which were considered immoral at the time). Women would conceal contraband items in their skirts as border police were not allowed to frisk women. Lucky for us, we weren’t smuggling any contraband items – only our picnic lunch which we enjoyed after the long hike. 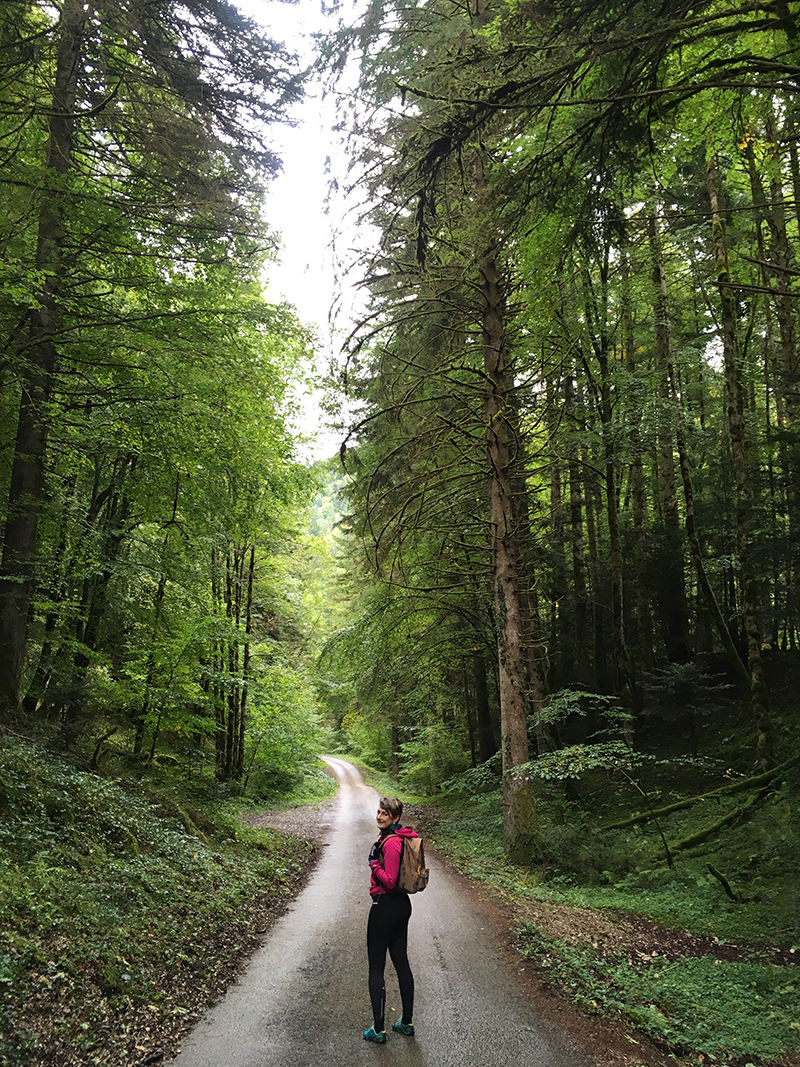 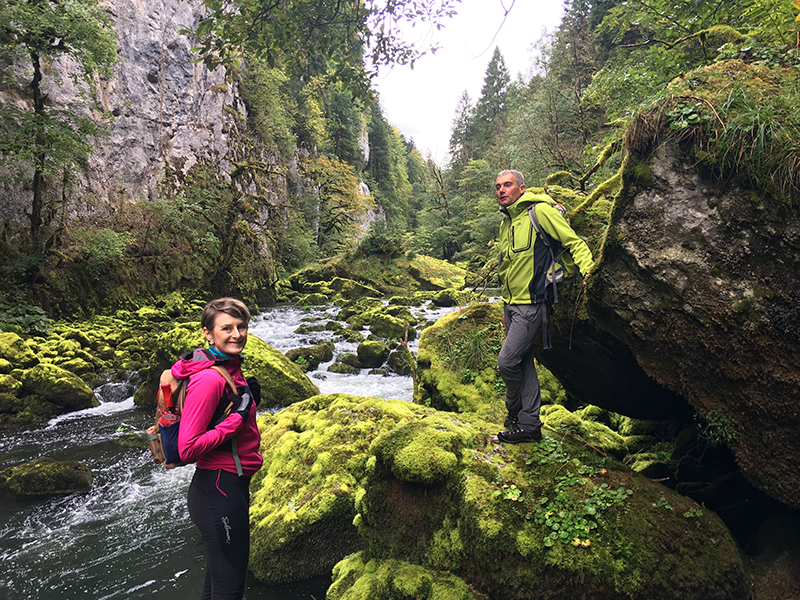 Following the hike we embarked on an even riskier activity – la via ferrata des échelles de la mort (via ferrata death ladders)! I had no idea what this was until I was harnessed in and suddenly scaling the side of a cliff. Via ferrata is Italian for “iron road” made up of a series of steel cables and iron rungs which allow you to pretty easily climb the rocky surface. Similar to rock-climbing, we were always secured to steel cables while we ascended. Some of the iron rungs and pegs were jutting out of rocky cliffs hundreds of metres above a deep valley. If you’re afraid of heights, than this would not be an activity you’d enjoy. I love heights and was in my element the higher we went. At one point though, I was unable to reach the rung jutting out high above me so we abandoned the trail through an easier escape route. That was quite fortunate, as it immediately started to rain and the slippery rungs would’ve made that part of the trail even more difficult. 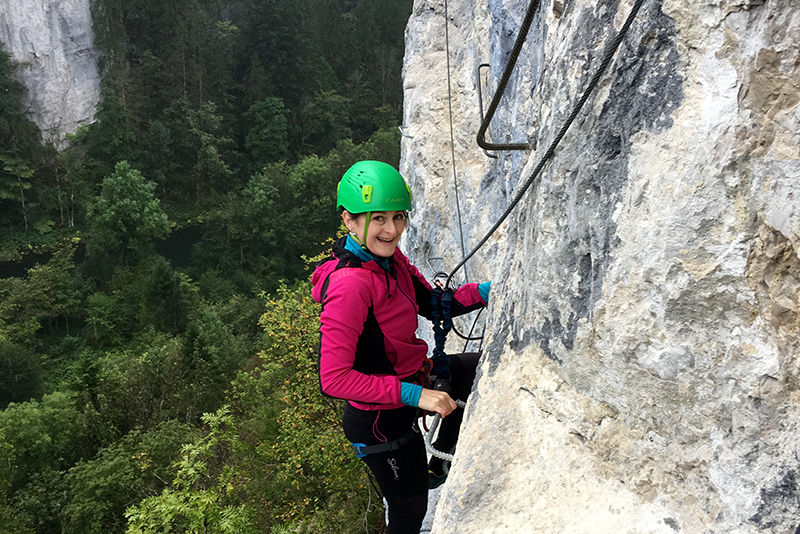 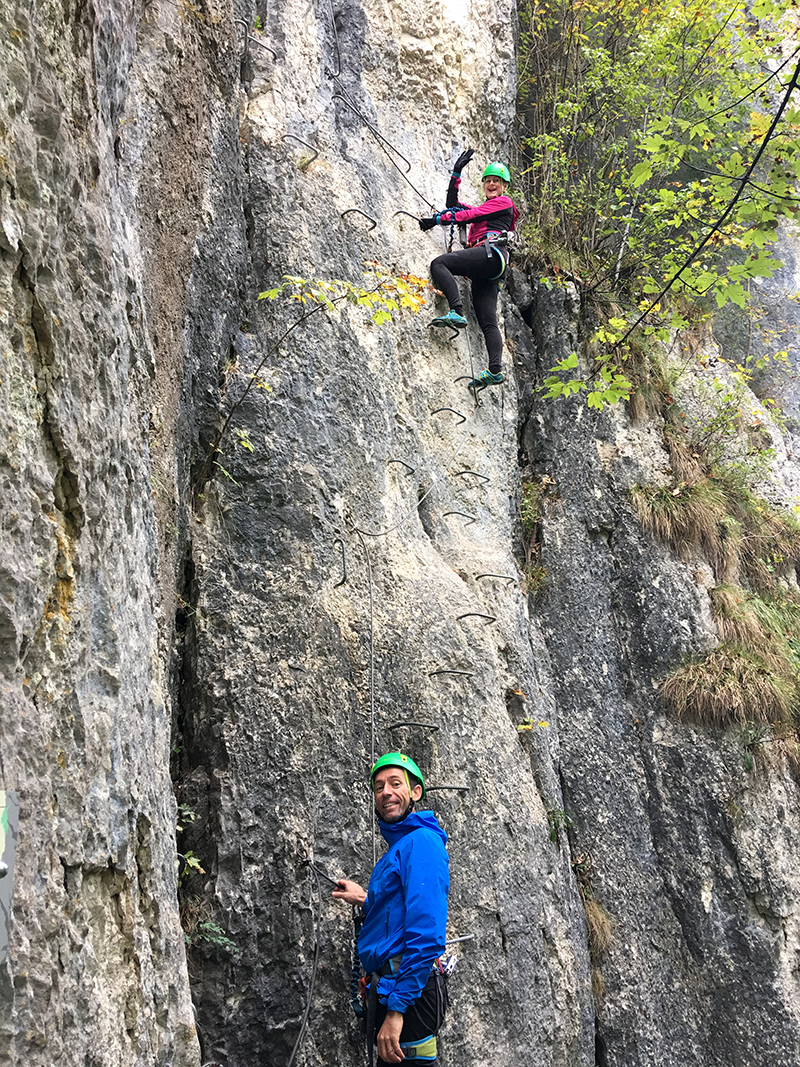 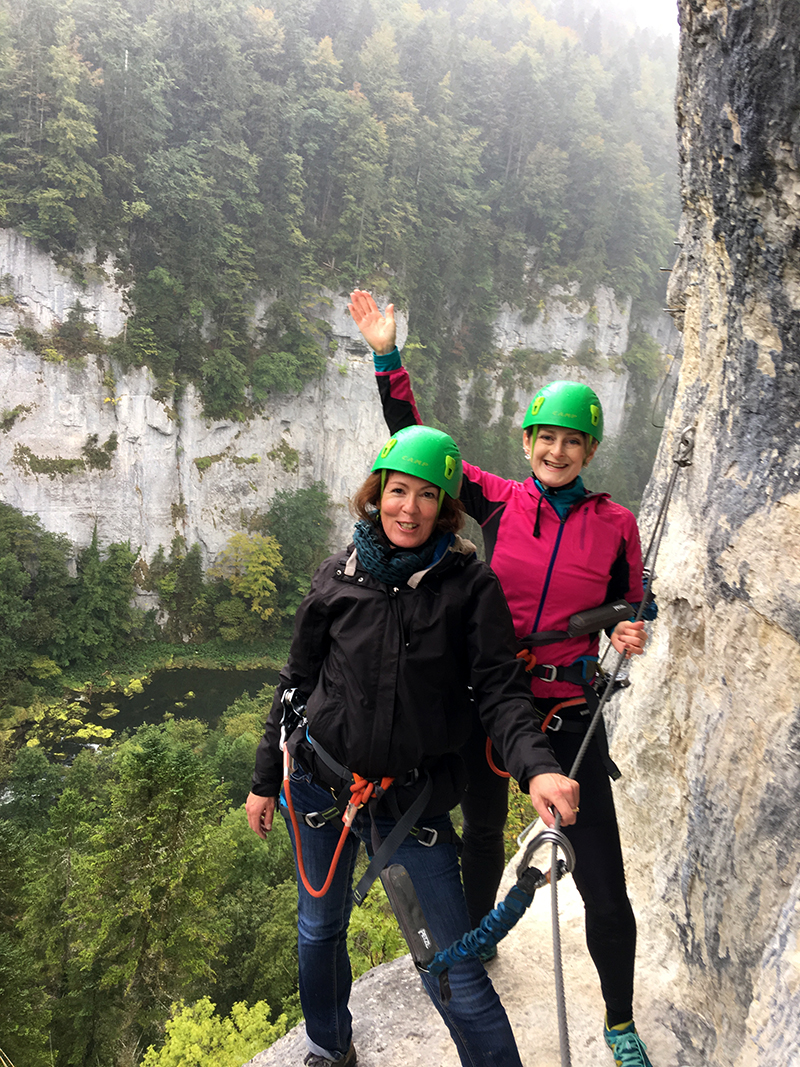 We concluded the via ferrata with a crazy zip-line over a gorge. I even managed to film it with my phone (much to the guide’s astonishment – See the video below). That was such an adrenaline rush! I really recommend the activity, but maybe have a friend film your zip-lining adventure so you are sure not to lose your phone. Access to the via ferrata is by reservation and it only costs 14 Euros to rent the equipment. You can make your reservation here. 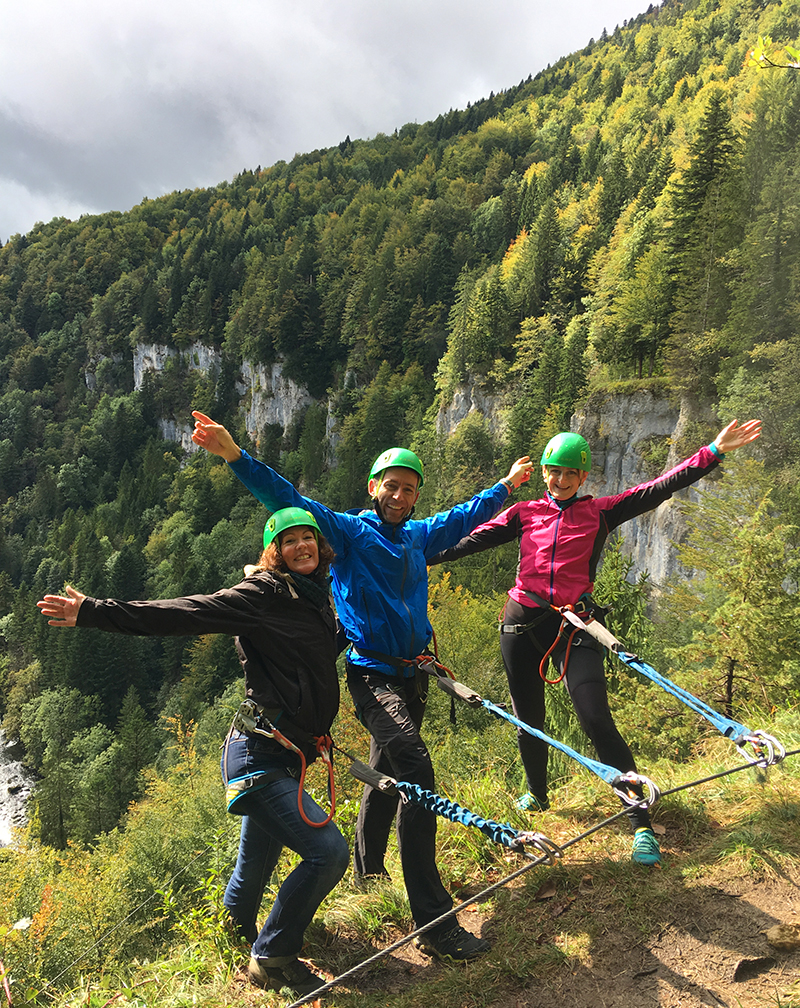 That evening, I met with Frédérique from the Besançon tourism board where she gave me a quick tour of the city (here, instead of owls, the brass markers we followed were engraved with watch faces as the town is known for its watch-making). Besançon is an interesting city with its many famous former citizens, like Victor Hugo who wrote Les Misérables and les frères Lumière (who were great contributors to the initial success of cinema). 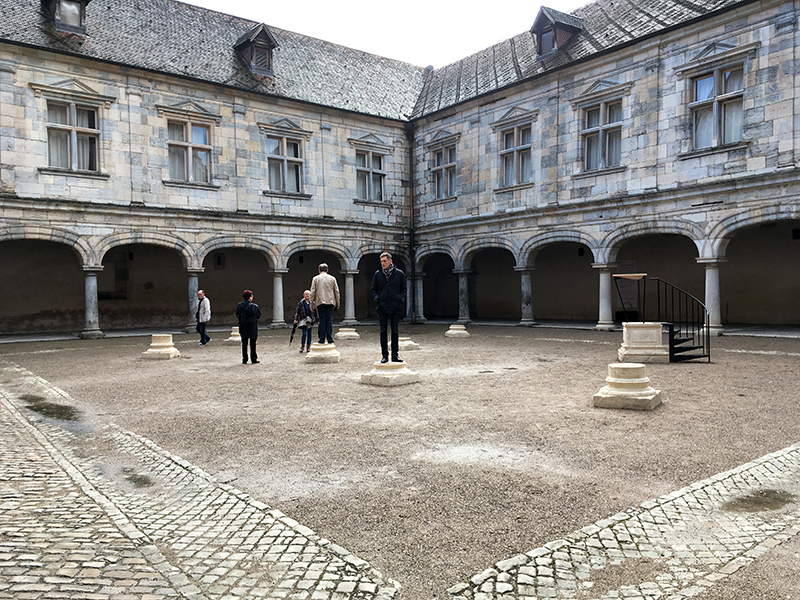 We ended our tour with a delightful tasting dinner at the fine food store, Doubs Direct which only sells quality local products from the Franche-Comté region. I enjoyed my crash course in local wine, cheese and charcuterie. Thierry Dietsch, the owner is very passionate about his products. The tastings vary and are very reasonably priced – you can book one here. 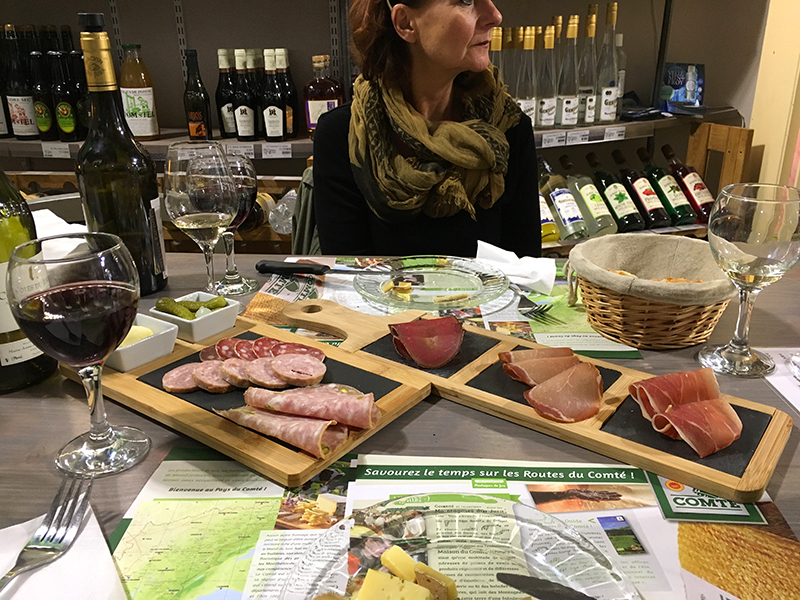 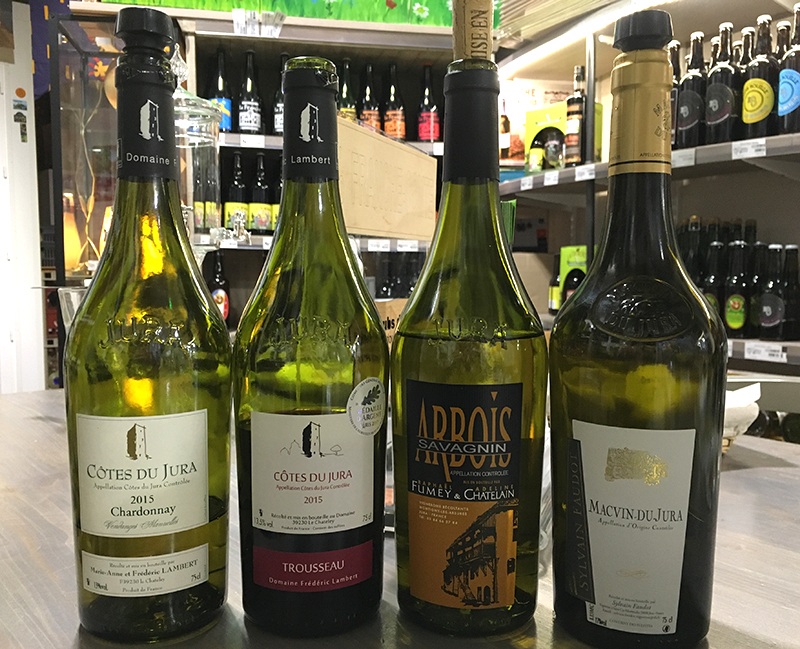 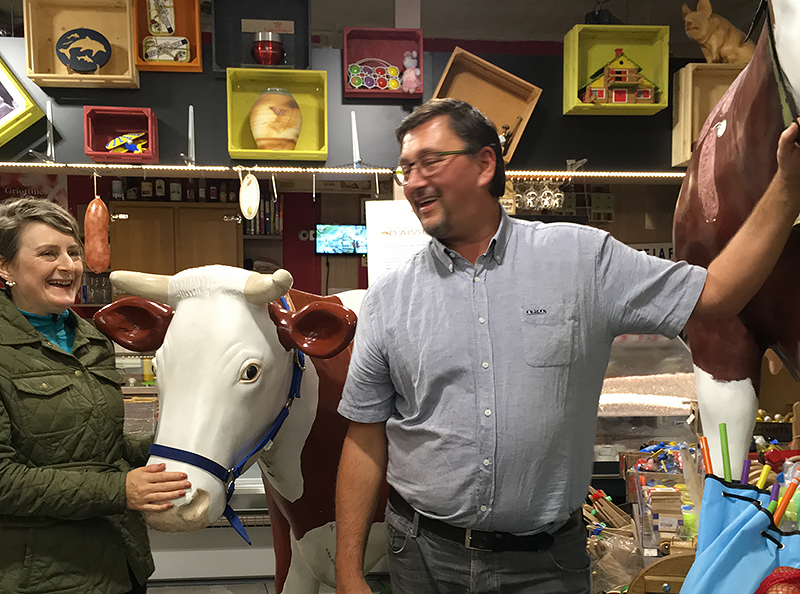 That night, I slept in a fancy tree house! I will save that story for part two of my France Nature adventure. Stay tuned!

France Nature was hosted by: