They say the way to a man’s heart is through his stomach, but I would say the way to a woman’s heart is through her eyes. When I dine out, I want my meal to lure me in and then of course it should follow through with sustenance and flavour. That’s how myself and 11 other female food enthusiasts were won over by Executive Chef Riccardo Bertolino and his team during a recent dinner at Maison Boulud. With each plate, from appetizer to dessert, we were drawn in by the unique ingredients and presentation. The way the staff and chef explained each dish and their components added intrigue, creating a story behind each morsel. It was an unforgettable and flawless dining experience. I wish I could share the savour of each dish with you, but I can at least show you what we ate (and drank), through my lens…

The cocktail: Cosmopolitain de l’Orient
The story: Every girl’s night out needs to start with a signature cocktail and this one tastes as good as it looks! Made with Ketel One vodka, Cointreau, ginger & coriander-infused syrup and white cranberry juice.
The winning ingredient and visual detail: an orchid frozen in a sphere of ice! Talk about a luxe libation. Isn’t it pretty? 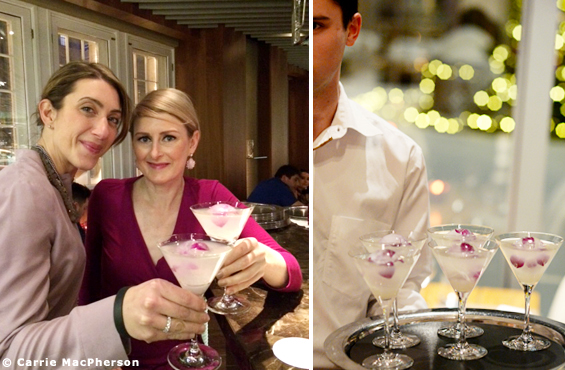 The setting: Our table was set up on the veranda with individual menus printed for each of us (Maison Boulud will do this for private groups). 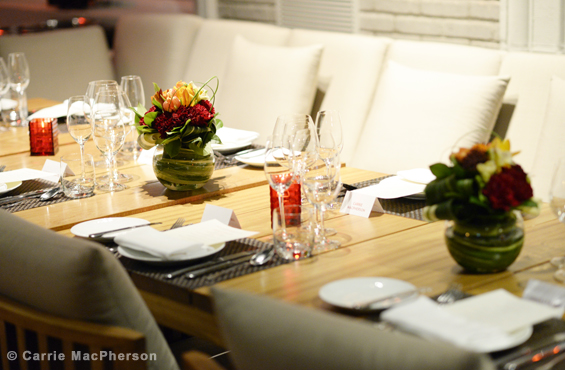 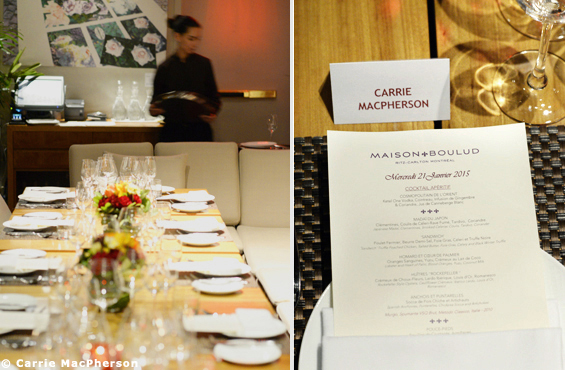 The floral arrangements: Jean-Pascal Lemire is one of Montreal’s most talented and sought-after florists. His atelier, Bouquet Fleuriste is located in the Ritz-Carlton. If you’re planning a special dinner at Maison Boulud, it’s a classy touch to add to the table. 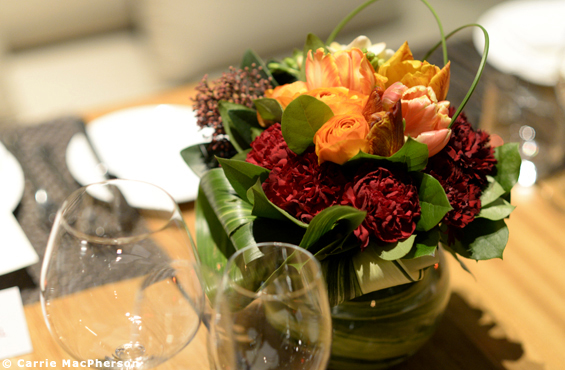 The appetizers: Madaï du Japon (Japanese Seabream tartar, served on a crispy cracker with clementine, smoked celery root and Tardivo radicchio) and a gourmet chicken sandwich (truffle-poached chicken, foie gras, celery and black winter truffle).
The story: That chicken sandwich was divine! We had a chance to visit the kitchen later where General Manager Cyril Duport produced the prize truffle (and more importantly, let us inhale its perfume!) 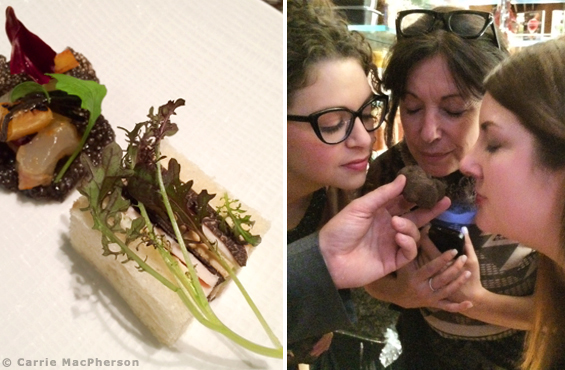 The Chef: Riccardo Bertolino, originally from Bologna, has worked at four Daniel Boulud restaurants and marvellously mixes his Italian roots with his formal French cuisine training. He surprised us by bringing some of the more exotic ingredients to our table.
The story: this is a fresh Hawaiian heart of palm he’s holding (I’d never seen one that didn’t come from a can). It was sliced thinly on lobster with palm heart, blood orange, yuzu and coconut milk, all served in a seashell… a mermaid moment. 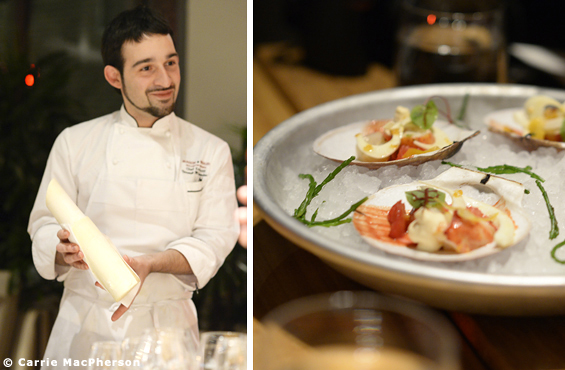 The oyster: I normally dislike cooked oysters, but this was incredible
The story: Riccardo’s take on the “Rockefeller” oyster, which (Thank God!) is nothing like the original. There are 3 things I don’t like in the original recipe: parsley, Pernod and bread crumbs. Bertolino’s version has none of that and is much more refined with tiny creamy cauliflower & Romanesco tips, Ibérico lardo (instead of bacon) and Louis d’Or (my favourite Quebec cheese, similar to Gruyère) is melted over the oyster. For me, this was one of the best things we tried. Bravo! 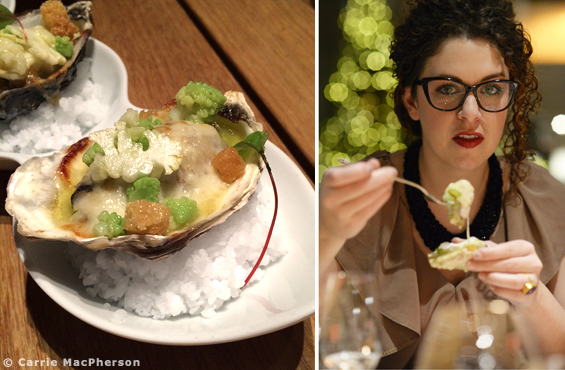 The Puntarelle: a late fall, early winter chicory that originates from Italy.
The story: this was served more as a decoration on a thin chick pea cracker with Spanish anchovies and artichokes. To be honest, I found the anchovy overpowering, but this was just a sampling of what is used to accompany the dish on the regular dinner menu’s “Milanaise Style’’ veal chop (with capers, lemon, artichokes, arugula, parmesan and anchovy) so, I would have to try the actual dish, but I did enjoy learning about the winter chicory! 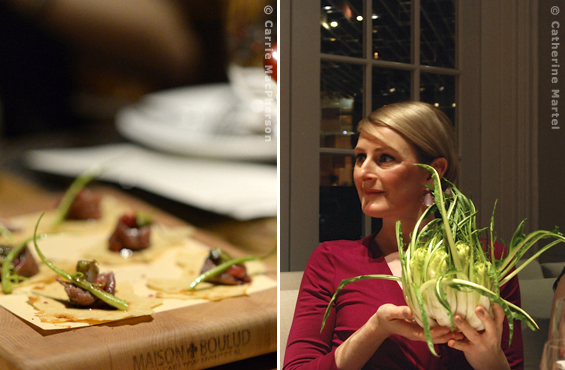 The conversation starter: Gooseneck barnacles
The story: we were all wowed when Riccardo brought out a dish of these on ice. They are living barnacles, harvested on the shores of British Columbia by indigenous people (the only ones legally allowed to). It takes five years for the barnacles to grow to harvest size. They were served in small slices much like carrots in a shellfish broth, and had a slight mushroom flavour. 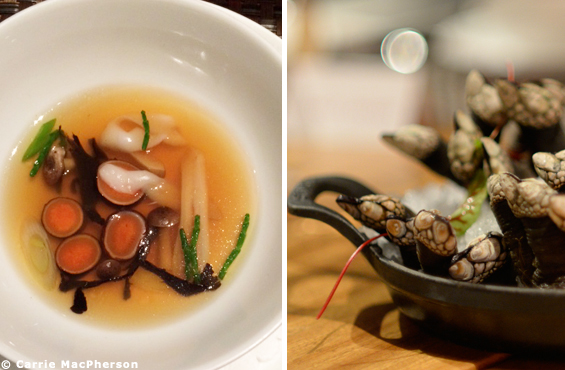 The pasta: Egg yolk raviolo, buffalo ricotta, chanterelles and truffle butter
The story: This was just creamy heaven in a sizeable raviolo. I’m so grateful for Riccardo’s Italian roots!
The finale: We were brought out a variety of desserts, but this was my favourite – Poire et meringue (pear, vanilla & walnut, in a Pavlova-style meringue, smothered in custard sauce). 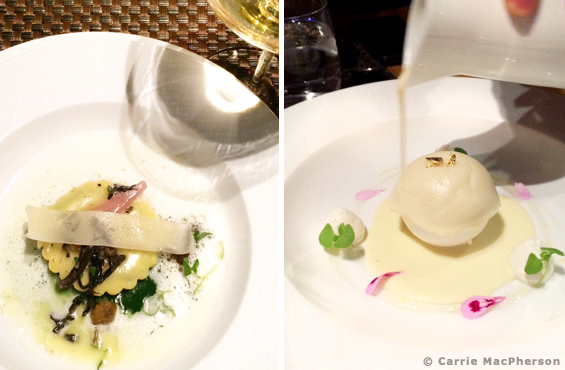 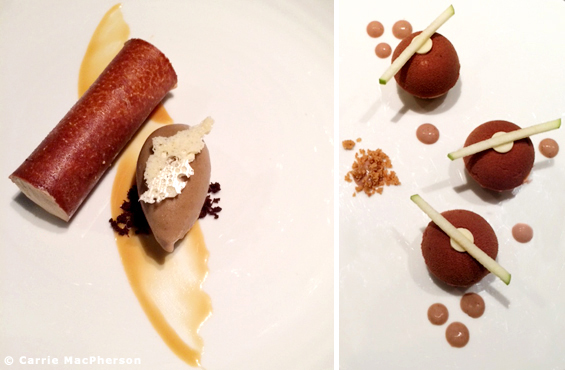 The wines: Murgo Spumante VSO Brut, Chablis and Trenzado
The story: The story wouldn’t be complete without wine! And sommelier Isabel Bordeleau is the perfect wine story teller. She described each wine with such insight that had us hanging on her every word. Isabel took us on a journey to Italy, France and Spain. We all had a serious crush on this Spanish “Trenzado.” A very distinct wine! 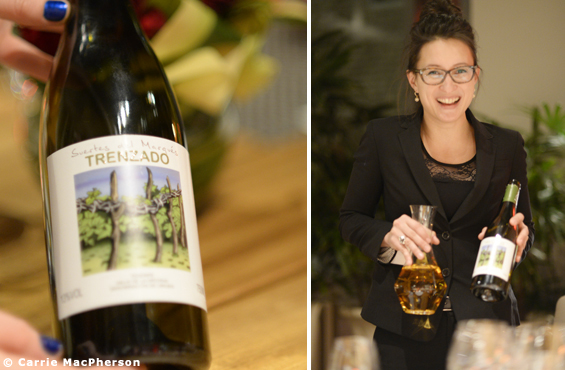 The company: I believe a meal is also only as good as the ones you share it with
The story: I’ve dined a few times at Maison Boulud in Montreal’s famous Ritz Carlton hotel, and I’ve always had memorable meals, but the best ones were shared with friends. When the Ritz asked if I would help plan and host a group of local food bloggers, I quickly gathered my favourite faces. I don’t have photos of all of you, but I want to thank you for making this evening an even more memorable one with your charm, your curiosity and your presence. 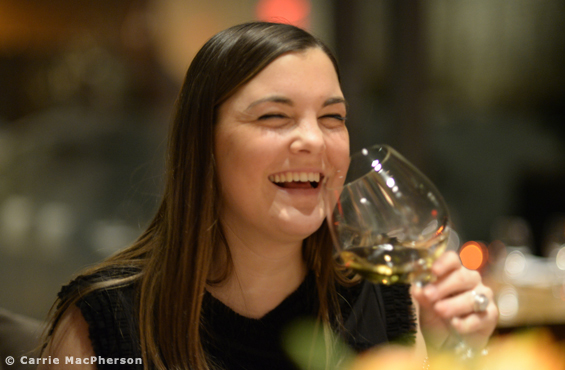 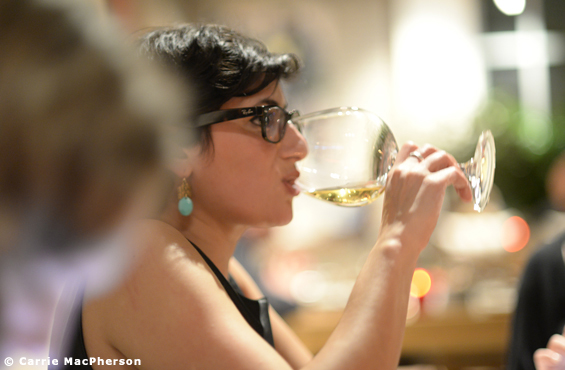 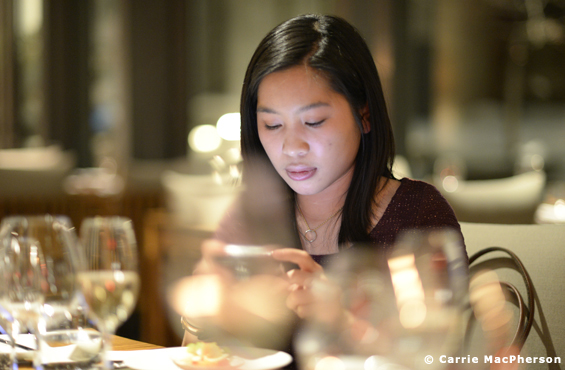 The restaurant: is one of Montreal’s finest tables and with that comes a fine price at the end of the night, so most people tend to save it for special occasions. Luckily, Maison Boulud is hosting “Les Soirées Terroir” on the coming two Sunday and Monday evenings with 3-course set menus at only $65. What better occasion to experience such an unforgettable dining adventure!

*Note: Carrie was invited to host the female foodie dinner at Maison Boulud, the meal and beverages were complimentary and no payment was received for her participation.

Three gourmet events not to miss this month