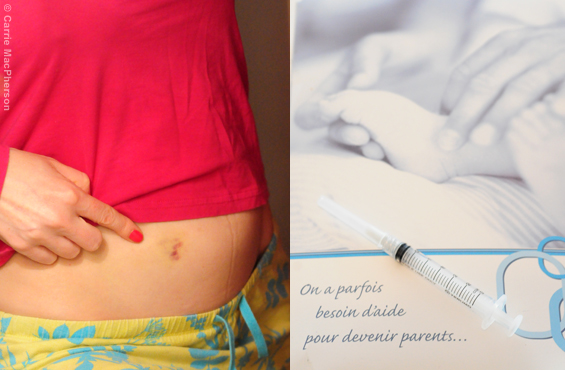 Photo 1: No baby in there! (Just bloating and bruising)  Photo 2: Cover of my Quebec fertility kit

When I was younger, I would often say that when I had kids, I wanted to have a girl first and then a boy. Silly me! Little did I know that I would go through five years of fertility treatments, unlimited unwanted periods, floods of tears and a series of sighs as friends and acquaintances announced their pregnancies left, right and centre. (There’s even an “Expecting a baby” life event status on Facebook that completely threw me off one morning.) Why am I sharing this now? I suppose to ease my pain a little, but also because I’m hoping my story will let people know that for every celebrated pregnancy or birth, there will always be someone who experiences each one like a silent yet swift blow to the uterus. Bitter much? Maybe just a little…

On wanting a family
I always knew that I wanted kids. My parents became foster parents when I was eight and soon we were picking up newborns from the hospital, and I quickly learned how to change cloth diapers and warm up baby formula. I loved being a mini-mom and felt confident that I would be a real mom someday. In my early and mid-twenties I thought I had all the time in the world, but in my late twenties, just after I moved to Montreal, my biological clock kicked in. Which I didn’t actually believe really existed until it happened. My brain and my body were telling me “Have a baby!” and my rational self, who had just made a major move across the country and was just setting up my business, said: “Are you nuts? Get a dog.” So I got a dog and I am not even a dog person, but I needed something to care for, a little being that needed me. 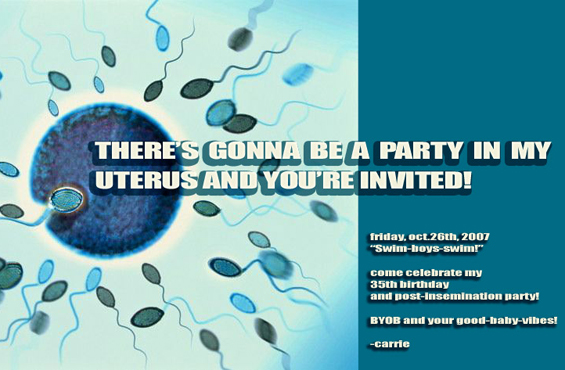 (My optimistic invite to celebrate my first insemination)

Timing is everything
In my perfectly imagined world, I had believed that I would have my two kids by the time I was 35. Well, my 35th birthday was fast approaching in 2007 and I was looking at my life and realizing that I didn’t even have a partner to have my two kids with. Luckily, I was surrounded by strong, independent women and a few of them were trying to conceive using donor sperm. I took myself to a fertility clinic, did all the required tests (which said I was perfectly fertile, btw), shopped for a donor online (a whole other story) and purchased enough sperm to give myself three chances for a baby bump. I was certain that I would get pregnant on the first try. It was right before my 35th birthday and I even held a fertility party to celebrate my adventure. After three inseminations (IUIs) over the course of about a year, no pregnancy and a lot of emotional heartache (and $4,000 less in the bank), I took a little break.

Just a little side note: After age 25, female fertility drops. After 30, infertility speeds up, after 35 if you’re still not getting pregnant you should seriously get thee to a fertility clinic, because by 40 you will only have a smidgen of a chance of getting knocked up.

A baby at any cost? No, thank you
I may be a very emotional person, but I am also somewhat of a rational one. I’ve never understood the stories I read about women who just don’t stop with the fertility treatments. In one article, a woman in Ontario had gone through 14 in vitro fertilizations and was still trying. WTF! Not only is IVF hard on your body and your emotions, what about her bank account? Fortunately for Quebec women, we have the first three IVF cycles fully funded by the Quebec Program of Assisted Procreation. That program started in August of 2010 and was partly the reason I decided to try again. Without the program, each IVF would cost around $10,000 (yowza!). So, just before my 38th birthday, I called the clinic to set up an appointment for IVF. Now, the Quebec government was giving me three more chances. 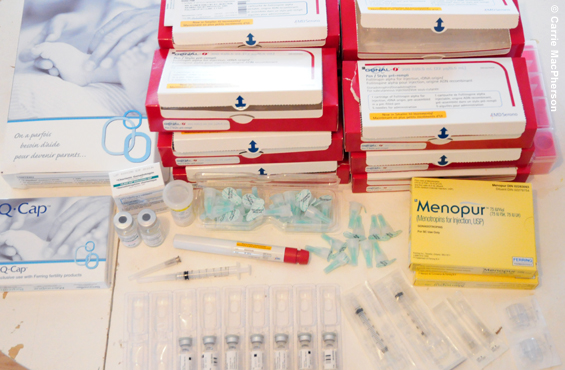 (Just a few of my injection supplies)

IVF is tough
Just so you know, IUI (intrauterine insemination) is pretty much as simple as having a Pap test (except that it’s more emotionally challenging, considering what’s at stake). Sometimes they prescribe fertility drugs to increase your chances, but they are usually just pills. IVF, on the other hand, is extremely invasive. You have to give yourself injections of super-hormones in the belly, two to three times a day. And they make you extremely emotional and bitchy. For each failed IVF I experienced, that guaranteed that for the next one, I was prescribed even more hormones. I got over the needles and the bruising, but it was the unglamorous bloating, weight gain, constipation and emotional drain that really did a number on me. My personal triumphs: for each IVF I produced two perfect embryos (joy!), but they just didn’t stick (sorrow!).

My last hope
My last IVF was in September 2012, and since it was my last funded cycle, the doctors decided to let the embryos develop into blastocysts (six days instead of two-to-three-day-old embryos), which apparently is risky, but if they live that long it increases your chances for pregnancy. I (or, I should say “we,” because for this cycle my partner was on board) produced two perfect embryos, one of which was transferred into my uterus and the other was frozen, just in case the first one didn’t take. Well, it didn’t and so we were putting all our money (figuratively) on “Blasty,” who was dozing away in the back of a fridge somewhere at the clinic from September until today. Today was to be the BIG day, our last chance, my final kick at the fertility can, but at 7 a.m. a nurse called to say that our Blasty had not survived the thawing process. Sigh… five years of hope down the tubes.

What’s next?
I don’t know what’s next. I always saw myself becoming a mom, having a baby of my own. Now, I guess we’ll have to consider the alternatives. One thing for sure is: no more fertility treatments for me. It’s too draining, emotionally and physically. I want my life back. I may adopt, but I know that this part of my quest for a family is complete. I tried my best. In the meantime, I’ll keep hiding people’s pregnancy posts in my Facebook feed.

Kindness for the childless
I know I’m not the only one out there who has experienced or is going through fertility issues. So I would like to leave you with some things you should probably not say or do around a woman who is having trouble conceiving, to avoid causing additional pain:

Finally, a humorous (but true) description of infertility I found on the Web:

Infertility: (n) A medical condition which diminishes self-esteem, your social life, as well as your checking and savings accounts. Causes sudden urges to pee on sticks, cry, scream, and a fear of pregnancy and birth announcements. Treated by a medical specialist who you pay to knock you up (this does not always work). Affects one in 10 women.