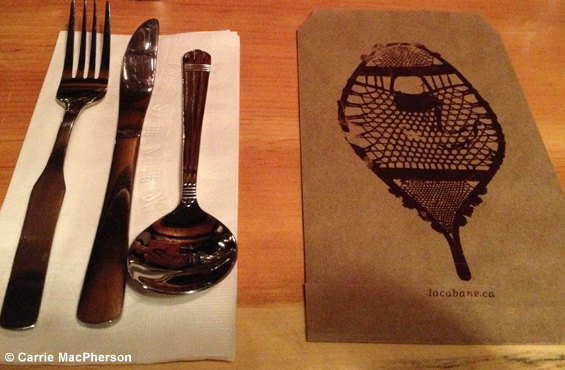 This year, the popular urban sugar shack is set up at the Café des Éclusiers par Apollo. Which is perfectly fine by me, since that happens to be literally across the street from where I live. Not that the former venue was that far either (for the previous years, it was held at the restaurant and event space, Scena near Place Jacques Cartier). So, instead of driving all the way out to some maple farm in the Townships, last Saturday, all my date and I had to do was put on our jeans and plaid shirts and walk the 2 minutes to our dinner destination.

It’s my fourth year of attending La Cabane and I prefer it to the traditional version of over-indulging in: “oreilles de crisse,” ham, eggs, beans and maple sugar pie. Each year, La Cabane’s four-course gourmet menu is conceived by an invited chef and this year we were treated to a creative maple-inspired meal developed by Chef Helena Loureiro of the Portuguese restaurant, Helena in Old Montreal (and also chef-owner of her original resto on the Plateau, Portus Calle). The meal was produced and executed by Chef and caterer, Givoanni Apollo and his team. 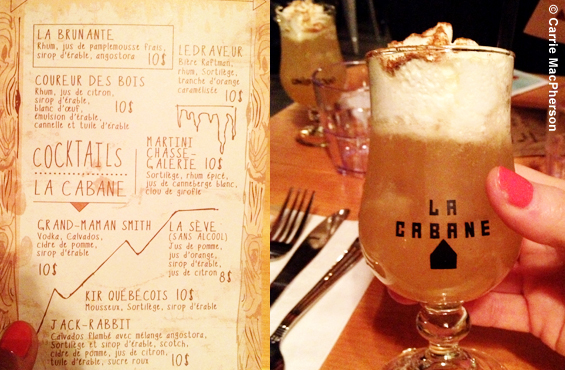 We kicked off our celebration of all things maple with a Cabane cocktail – the “Coureur des bois” with rum, lemon, maple syrup, cinnamon, egg white and maple emulsion – a real treat. There were about 8 different creative cocktails on the menu (each with some sort of maple ingredient) and watching the bartender prepare them was also a treat. Now we were ready for our feast! 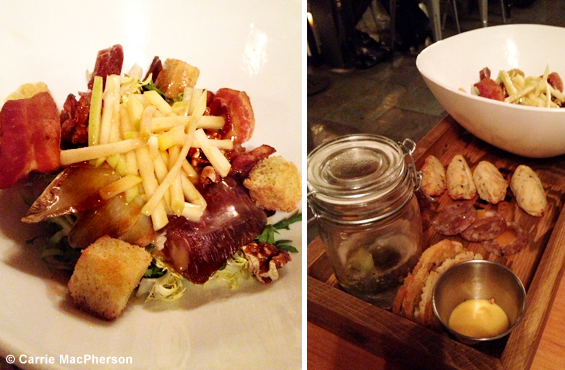 I really enjoyed the meal, which was copious for what it costs ($59 per person before tax, tip and booze). We started off with a delicious salad of grilled endives, lamb gravalax, fried smoked pork cheek (looked like bacon) and matchsticks of golden apples, tossed in a maple vinaigrette. Some may find it a bit sweet, but I thought it was great. Along with the salad came an assortment of small starters: cod cakes with a spicy and garlic-y maple piri-piri dip, pork and apple sausage slices on tiny toasts and my guy’s fave: a mason jar of sardines marinated in ice cider. 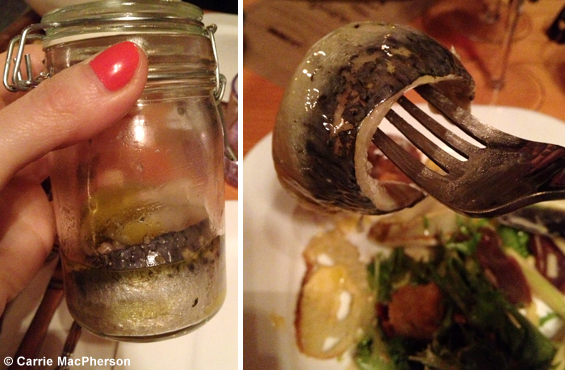 Following the salad and starters we were served a cream of potato and cabbage soup, which contained a slice of chorizo to add some heat, and a mini-rösti floating on top. If it weren’t for the chorizo, I would’ve found it a bit bland. My favourite dish came next: a pot of pork and beans AND chicken. The white bean stew inspired by the traditional Portuguese dish, Feijoada, contained chorizo, tender pork knuckle and smoked bacon. On top of all that was an X of two chicken drumsticks lacquered with maple syrup and a poached soft-boiled egg. There was more than enough stew for two, but we still managed to eat most of it. I also loved the grilled mixed root veggies that were dished up with the stew. 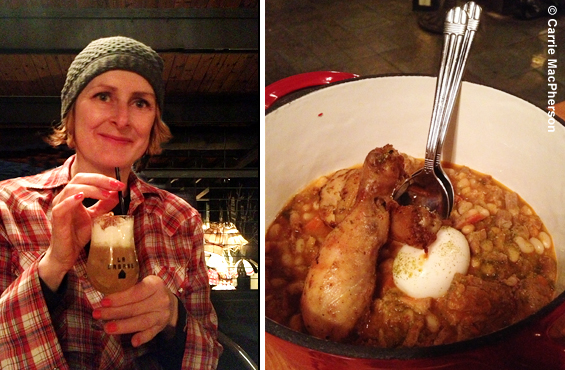 Finally, for dessert, a trio of maple sweets including: a modern version of the maple tart by pastry chef and chocolate maker, Christophe Morel, a chocolate pudding and my personal favourite, a mini maple-flavoured “pasteis de natas” (a traditional Portuguese custard pastry). 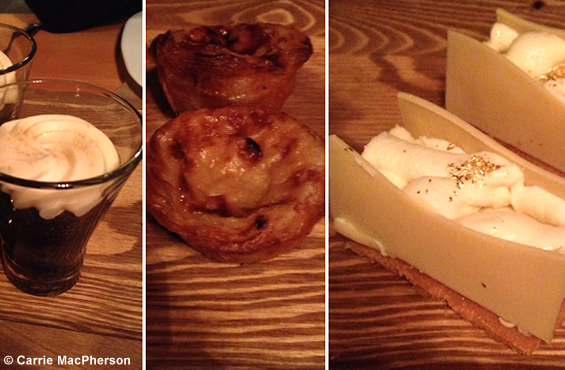 The meal and location were perfect, the venue is much better than the previous years, and my only criticism would be the volume of the music. We could barely hear each other, even though we were sitting directly across from one another. Maybe not the best place for a tête-à-tête, but an excellent choice for a group of friends!

La Cabane
Wednesday – Saturday @ 6pm, until April 14th
Also, Fridays and Saturdays @ 11:30 am
For more info and to make a reservation, visit:
www.lacabane.ca